Years ago, I had a great boss. Very smart, good people manager, understood strategy and tactics. There was one flaw. One joke was that head never use a sentence if a paragraph would suffice. That showed most clearly is the voluminous number of slides that would be part of any presentation.

He comes to mind because I attended Tableau Software’s presentation to the Boulder BI Brain Trust (BBBT). 93 slides. Yes, 93. Even if folks were not familiar with BI, I think the presentation would have been a bit, shall we say, extensive. Just like that boss, the presenters had a lot of very interesting to say, but finding it was often hidden in too much explanation. So I don’t make the same mistake while describing the presentation, here are my key takeaways:

Everyone even vaguely involved in BI should already be familiar with the basics of Tableau. It is one of the leaders in the latest generation of BI solution providers. They are known for their visualization skills yet haven’t scrimped at the technology needed to manage large data sets. They had a tag team of four presenters for the presentation. The first presenter was Suzanne Hoffman, Sr. Director of Analyst Relations, who gave the overview of company growth since last year’s BBBT presentation.

Francois Ajenstat, Sr. Director, Product Management, then followed with, as would be expected from product management, a review of products including a discussion of v8.1. In a review of a number of things, the one item that caught my attention was the extension of their Cloud packages. It was clearly stated that the product wasn’t redesigned for the Cloud, just moved outside the firewall to a hosted environment, but that’s a fine first step considering the rest of the work they’ve done. What’s critical is they’ve thought through the Cloud business model and how that is different than what’s needed for purchased software.

The one issue I have, from an analyst perspective, was the very brief discussion of the supposed success and early adoption of their 8.1 offering. While describing the number of companies who have rapidly adopted it, there was no breakdown. How many were new customers versus old? Were they larger or smaller companies? While it is to be expected that newer companies and departments, as well as smaller companies, would be the first to adopt, and while that’s not necessarily an issue, clarity would have helped.

In a look ahead about v8.2, which we were told is not under NDA was a look at what seems to be an extremely professional Mac port. It’s not just moving what was on MS Windows to the Mac, as many companies do. It looks like a product designed for the Mac that will make very happy any user of that platform. While Francois did a good job explaining why they wanted to port to a platform that has 10% of the business market, I think Tableau should be more explicit on who that 10% is and why that matters. Marketing. Yes, I know, I’m biased towards marketing, but think about the fact that marketing was the home of the Mac during the lean years. Why? Because the Mac has always been better for visualization, so marketing continued to use the platform for creating ads, graphics, charts and more. Providing a great Mac port enhances the ability of marketing to serve good analytics and presentations to the rest of the firm.

The presentation was then handed to Robert Kosara, a research scientist, to talk about visual storytelling. Here, again, there were too many examples and a blurred message. While trying to describe how the concept was different than the visualization theories that have happened from Tufte onwards, the difference wasn’t made very clear. There seemed to be two main takeaways. First, they’re only describing the fact that modern BI allows isolation of and drill down into segments of the visualization, things that aren’t possible in old-line static print medium. That seems intuitively obvious rather than a giant leap forward. The second part of it isn’t with theory but with some of Tableau’s plans (again, we were told that this level isn’t under NDA) to provide technology that merges visualization with presentation layout, where the application will be able to take the equivalent of slides of the visualization to increase the presentability of analysis. That’s still early in work but could be very interesting as it matures.

The final presenter was Ellie Fields, VP of Product Marketing. Maybe I’m biased, as my background is in product marketing, but I wish this section had not been last. The most important thing is her presentation was what I think best brings out why Tableau is a leader. Her section focused on the changing environment for BI implementations. Everyone in the industry acknowledges the power of the BI front-end is giving business users more and more ability to be involved in creating and managing their own analytics. We know that IT is going to have to change from a more controlling focus to one of service. Ellie Fields has thought this through and clearly defined how the change doesn’t obviate the need for IT but only changes the relationship between the two sides. The most important slide in the deck is the one below, where a high level description of that partnership is presented. 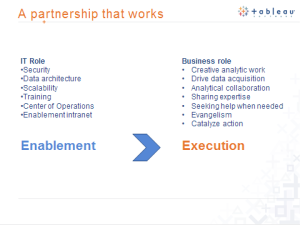 The past growth of Tableau Software has clear reasons. It was a good technology introduced to the market at the right time. What they’ve done so far is a sign of management’s ability to understand an early market. Continued growth is across Moore’s Chasm and a longer term strategy is critical. In my (probably not so humble) opinion, while technology is critical there are far too many technology companies that failed with great products. It’s the vision shown in both Francois Ajenstat’s discussion of managing both on-premises and Cloud markets combined with Ellie Field’s understanding of how to position the company to help businesses through a major change in how IT and business users will relate that show the strength of the company moving forward.

I just wish we heard that information bubbled and  more visible rather than lost in a bunch of other words that weren’t really needed.