I watched a webinar yesterday. It was sponsored by Magnitude, the company that is the result of combining Kalido and Noetix. The speakers were Ralph Hughes, a data warehousing consultant operating as Ceregenics, and John Evans of Magnitude.

Ralph Hughes’ portion of the presentation was very interesting in a great way. Rather than talking about the generalities of enterprise data warehouses (EDW) and Agile, he was the rare presenter who discussed things clearly and in enough detail for coherent thought. It was refreshing to hear more than the usually tap dance. 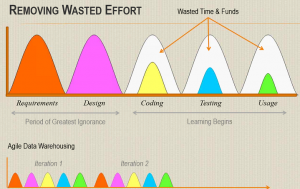 Ralph’s slide on the advantages of agile development for EDW’s is simple and clear. The point is that you don’t know everything when you first acquire requirements and then design a system. In the waterfall approach, much of coding, testing and usage is wasted time as you find out you need to do extra work for new requirements that pop up. Agile allows business users to quickly see concepts and rethink their approaches, saving both time to some productivity and overall time and effort of development.

After talking about agile for a bit, he pointed out that it does save some time but still leaves lots of basic work to do. He then shifted to discuss Kalido as a way to automate some of the EDW development tasks in order to save even more time. He used more of his presentation to describe how he’s used the tool at clients to speed up creation of data warehouses.

One thing he did better in voice than on slides was to point out that automation in EDW doesn’t mean replacing IT staff. Rather, appropriately used, it allows developers to move past the repetitive tasks and focus on working with the business users to ensure that key data is encapsulated into the EDW so business intelligence can be done. Another key area he said automation can’t do well is to manage derived tables. That still requires developers to extract information, create the processes for creating the tables, then moving the tables back into the EDW to, again, enhance BI.

Notice that while Mr. Hughes spoke to the specifics of creating EDWs, he always presented them in context of getting information out. Many technical folks spend too much time focused on what it takes to build the EDW, not why it’s being build. His reminders were again key.

John Evans’ presentation was brief, as I always like to see from the vendors, rounding out what his guest speaker said. He had three main points.

First, the three main issues facing IT in the market are: Time to value, time to respond to change and total cost of ownership. No surprise, he discussed how Magnitude can address those.

Second, within his architecture slide, he focused on metadata and what he said was strong support for master data and metadata management. Given the brief time allotted, it was allusion to the strengths, but the fact that he spoke to it was a good statement of the company’s interests.

Third, he discussed the typical customer stories and how much time the products saved.

The webinar was very good exposure to concepts for an audience thinking about how to move forward in data warehousing, whether to build EDWs or maintain them. How agile development and an automation tool can help IT better focus on business issues and more quickly provide business benefit was a story told well.