Today’s TDWI webinar was a good one. Fern Halper is one of the few analyst who managed to speak to the points that are relevant to the sponsor, so that the full presentation works. Today was no different. Today’s sponsor presenter was Allen Bonde, VP, Product Marketing and Innovation, Actuate, and they made a good team.

The presentation was a good overview of the basics of predictive analytics. It started with an overly complex but accurate description by Fern as predictive analytics being “A statistical or data mining solution consisting of algorithms and techniques that can be used on both structured and unstructured data to determine outcomes.” Data mining is an overused term that still manages to be too limiting, it doesn’t belong there. Neither does the description of different types of data as some predictive analytics, such as in operations, don’t necessarily need unstructured data. I’d just say it’s the analysis required to increase the ability to better understand the likelihood of near term outcomes.

What I really liked about both presenters is that they tended to use customer facing examples from sales, marketing and customer support to discuss predictive analytics. Too often, the focus is on operations, either at a detailed process level or a very high business review at the CxO level. The fact that there are many more applications that impact a larger body of business users is good for the market to see.

One thing that I think Ms. Halper didn’t quite think through was how decision trees, her favorite tool (at least as per this presentation) for predictive analytics. While she did briefly mention that there’s overlap between predictive analytics and other types of analysis, I’m not in agreement that trees fit the description – especially as her main example was customer support. In that arena, and others such as financial approvals, decision trees have long been used for call scripts and process flow. They aren’t used to make predictions but to help the service folks make decisions regardless of the outcome at each step. I’d like to hear more about how she thinks they tie into the other predictive tools she mentioned.

Another key point Fran made was how the new technology means that the tools are available closer to the actual business knowledge worker, with applications becoming useable by business analysts, not just statisticians. The numbers from TDWI Best Practices Report Predictive Analytics for Business Advantage, 2014 were interesting. 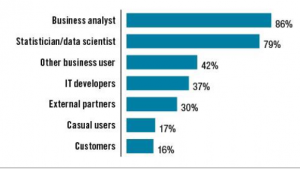 It was humorous, but no surprise, that the first question in Q&A was from somebody who probably defines him or herself as a “data scientist.” There was umbrage at mere business people being able to work with predictive analytics packages. Halper tried to allay the fears that the money spent on an MS might become useless by pointing out that detailed math is needed to create the processes and some understanding of the analytics is still needed to intelligently use the results of the analysis.

Still, I expect the numbers for analysts and “other business users” to grow in the near future while the statistician is more properly used to build the algorithms and think of new tools that can then be provided to the knowledge worker through modern tools.

Allen Bonde’s section of the presentation, unlike others who have been too technical or salesy, was too high level and didn’t differentiate enough from Fran Halper’s. While we want to see companies positioning themselves as thought leaders push concepts, they are the sponsor and need to tie the thoughts back to their business.

Let’s start with Actuate’s tagline: The BIRT company. What’s BIRT? A bleeding edge audience will know, but TDWI has a wide audience of knowledge in its audience, from open source to large enterprise, still almost exclusively proprietary software shops. He needed to give just a couple of sentences but he didn’t.

The Business Intelligence Reporting Tools (BIRT) project is an attempt to create an open source BI interface. It was started by Actuate who turned it over to a foundation to drive open development. As usual, for most of us, refer to the appropriate Wikipedia article for a brief overview.

His main point was, as he put it, “Fast is the new big.” Though the concept isn’t new and is rather just a return from the focus on misnamed Big Data to how to take whatever data we have, regardless of size, and shorten the time to analyze and provide that information to decision makers. Most of the rest of what he said also wasn’t new to people who have been in the BI industry for a while, but it was at a good level to reinforce Halper’s point to an audience who is just getting familiar with the state of the market.

Fran Halper and Allen Bonde gave a good, high level overview of some of the key points about predictive analytics. I had nits with some issue and think that a little more meat might help, but I suggest going to TDWI to view the webinar if you are someone who wants to know the basic issues needed to start using predictive analytics as part of a robust BI solution to help business make better decisions.